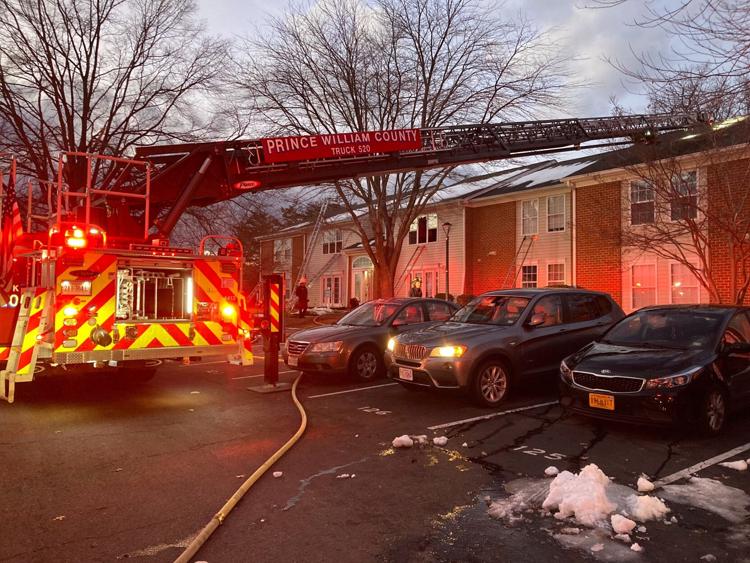 The Prince William Fire Marshal’s Office determined the cause of the blaze located in the 15600 block of Weathervane Terrace was an unattended candle.

Woodbridge, VA — An unattended candle was determined to be the cause of a condo fire in Woodbridge Monday afternoon that left one person injured and at least 13 people displaced.

Firefighters were called to the building, located in the 15600 block of Weathervane Terrace, in the Rippon area at 4:41 p.m. Monday, to find fire and smoke coming from a unit in the rear of the complex.

Matt Smolsky, assistant chief of the Prince William County Fire Department said that one tenant had to be evacuated from the second story with a ladder, and one of the inhabitants in the unit where the fire started was taken to a local hospital with non-life-threatening injuries.

According to statistics from the National Fire Protection Association (NFPA), there are more than 350,000 home fires each year in the U.S., leading to more than 2,600 deaths.

Candles rank fifth in the top 10 causes of house fires:

The word candle comes from Middle English candel, from Old English and from Anglo-Norman candele, both from Latin candēla, from candēre ‘to shine’.

Preceding the candle, people used oil lamps where a burning wick was set in a vessel of liquid oil. The Romans started producing true dipped candles from tallow, beginning around 500 BC and candles made in European ancient times were made from numerous forms of natural fat, tallow, and wax. In ancient Rome, candles were made of tallow due to the prohibitive cost of beeswax and today, 100% pure beeswax candles can cost up to 10 times as much as soy or paraffin candles.

The highly toxic fumes and soot released by burning paraffin wax are the same as those found in burning diesel fuel.

Poisonous chemicals present in paraffin (and released into the air through burning) include, but are not limited to known carcinogens such as: Acetone, Benzene, Toluene, Trichlorofluoromethane, Carbon Disulfide, 2-Butanone, Trichloroethane, Carbon Tetrachloride, Tetrachloroethene, Chlorobenzene, Ethylbenzene, Styrene, Xylene, Phenol, Cresol and Cyclopentene.

To learn more about this subject, type “Paraffin Candles Toxic”, “Toxic Fumes Scented Candles” or any combination of similar keywords into the search box of your favorite search engine.

Many so called 100% soy wax candles contain a small amount of paraffin since standardized labeling of soy candles is not enforced or regulated. This means that any claims of ingredients or benefits, are left up to the discretion of the soy wax maker.

In addition, over 90% of soy beans grown are genetically modified and sprayed with toxic pesticides. So, if you are buying soy candles, more than likely you are supporting the production of GMO’s.

To learn more about this subject, type “Soy vs. Beeswax Candles” or any combination of similar keywords into the search box of your favorite search engine.

The bottom line is: When you burn petroleum-based paraffin wax candles or scented candles, you are filling your home with highly toxic chemicals and fumes.

100% pure beeswax candles are made of natural, organic raw beeswax which is made by honey bees in the hive. 100% pure beeswax burn clean and have their own natural honey-floral fragrance even when not burning. Unlike paraffin candles, they do not contain any additives, synthetic chemicals or leave behind black soot from smoke when they are burned.

The highest quality beeswax candles are hand poured or dipped and made with 100% cotton wicks and 100% all natural, unbleached yellow beeswax, produced by bees in the USA.