Tata Play: How the Commercials Helped Spread The Word 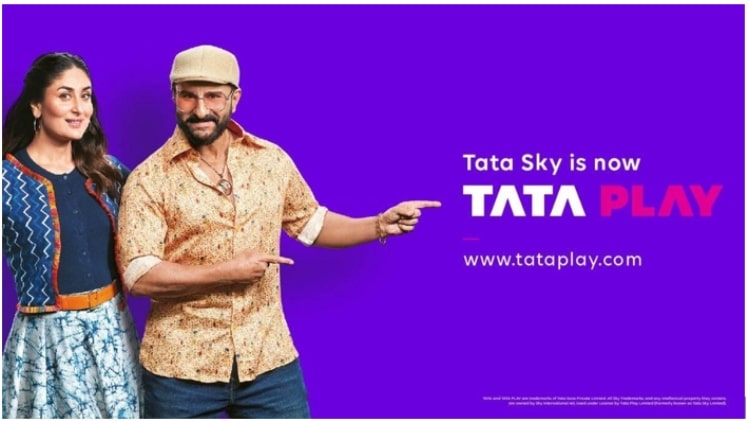 One of India’s best DTH service providers has lifted the curtains to reveal its new identity. Tata Sky will now be known to its subscribers as Tata Play, as they diversify and grow their business further.

Managing Director and CEO of Tata Play, Harit Nagpal, mentioned that Tata Play had capped their position as market leaders. The company has already built an ecosystem to deliver content by considering OTT and broadband. He also mentioned that consumers could quickly discover content when distributed evenly. And hence it was high time to put forward the new identity that resonates beyond DTH services.

The entertainment provider has taken a giant leap in creating their new identity. Ogilvy India designed the campaign, and Venturethree designed the unique brand identity. Mr. Nagpal Tata Play’s broadband business has been enriched with 100% fiber networks. This helps in delivering content at a tremendous speed to the consumers. Their broadband business will now be known as Tata Play Fiber.

Tata Play has always kept its consumers on the edge of their seats with its varied entertainment services. The rebranding of the company comes in light of the ongoing change in the entertainment preferences of viewers. People are getting increasingly hooked on OTT content while simultaneously consuming television channels. So, Tata Play strategised to strengthen its 2-year old OTT services and make it an integral part of its brand identity.

The rebranding has been so tactfully designed by the brand that anyone can readily relate to the new brand identity. While making key changes to the brand name and entirely transforming the brand logo and colours, the company made sure that the changes would not only retain its customer base but also go on to acquire new users. Tata Play’s Chief Communication Officer, Anurag Kumar, explaining the creative journey, said that they retained the core values of the company while shaping the new, futuristic brand identity. And they smoothly pulled off the rebranding with their meticulous planning and exceptional execution.

The content consumption patterns have changed over the years.  The OTT platforms have gained immense popularity and are in demand. Tata Play decided to blend in their DTH services with the OTT platforms. Hence, they created their aggregator app – Tata Play Binge.

Subscribers can watch content from the 12 OTT platforms and Amazon Prime Video through a single platform. The brand has also added the OTT mammoth, Netflix, to the pack. Tata Play offers the flexibility of single payment and subscription to enjoy seamless entertainment.

Their newly unveiled brand identity is being promoted with carefully crafted campaigns across TV and social media. The brand has roped in Bollywood adorbs-superstars Kareena Kapoor Khan and Saif Ali Khan to promote the new offerings in the national market. And for campaigning in the South, superstars Priyamani and R. Madhavan have been brought onboard.

With the rebranding of the company, Tata Play brings a range of exciting combo packs where DTH channels and OTT content have been fused.

The Tata Play Binge Combo packs are bundled offerings where you can handpick your favourite TV channels along with the vast pool of web content from the OTT apps. You can stream these combos on your TV either using the Tata Play Binge+ set top box or an Amazon Fire TV Stick – Tata Play edition for SD, HD and +HD set-top boxes.

Another cool range of combos are the Tata Play Netflix Combo packs. These combos include Netflix besides the television channels and other OTT apps. The combos allow users to choose from the 3 Netflix plans – Basic, Standard and Premium. So, you get unbridled access to the vast Netflix library and enjoy everything the platform has to offer, from films, documentaries and web series to TV shows, comedies and more.

Promotional campaigns were required to spread the word about rebranding.  For that reason, Ogilvy India has conceptualized multiple ad films. People would get to know that Tata Play has moved beyond DTH services through these commercials.

The promotional films were released in the North and South Indian markets, starring Saif Ali Khan and Kareena Kapoor Khan for the north region and R Madhavan and Priyamani for the South region.

The advertisements that are doing the rounds are quite attractive and impressive as well. Kareena mentions “Ab Tata Play ke saath, TV ke alava, Netflix bhi dekh sakte hain”. Well, the way she presents the news with great humour, makes the advertisements quite likeable for the audience.

The ad film for promoting in the South stars Priyamani and R. Madhavan. It goes without saying that Tata Play’s choice of actors was great, as these are some of the most popular faces in the entertainment industry. Also, the brand aimed at targeting viewers belonging to different linguistic groups. That’s the reason, Tata Play decided to launch these advertisements in both the languages, i.e. Hindi and Tamil.

Ogilvy India has designed the ad films very swiftly. It helps in delivering the right message to the people. And, Tata Play has taken the best leap to move beyond being India’s leading DTH service provider.

So what are you still waiting for? Grab your phone and give a call to Tata Play, or visit their website to get your new DTH connection today. Experience the best of entertainment firsthand and see for yourself why the brand is leading the DTH industry in India.